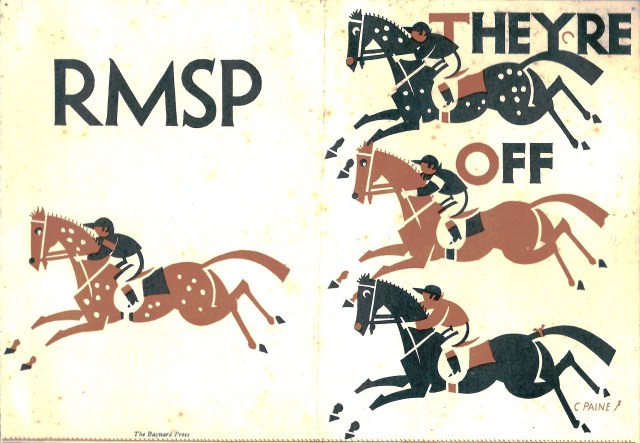 Following a suggestion from the author of ‘365posterblog’ I have found the explanation for the RMSP card.   RMSP stands for ‘Royal Mail Steam Packet’.   The RMSP Company, founded in 1839, became the largest shipping group in the world when it took over the White Star Line in 1927.   In that year Cyril Parkinson produced a film, To Constantinople in RMSP ‘Araguaya’ 1927.   (North-west film archive film no. 6909)   It is silent and lasts for 17 minutes and 14 seconds.   The following description is given:

‘The Parkinsons take a cruise on the RMSP Araguaya through the Dardanelles and towards the Black Sea.   Includes footage of the town of Tangier from aboard the ship and various street scenes showing Moroccans along the street and amongst buildings.   A short sequence shows the ships Araguaya and P&O Ranchi docked in Tangier harbour. Passengers aboard the Araguaya participate in a horse racing game and play badminton.  ….. ‘

A typical Paine touch is the use of a horse shoe as stand in for an apostrophe in ‘they’re’.   His work is full of humorous details that are often overlooked.

Horse racing was a popular pastime for first class passengers aboard the transatlantic liners.   In The Only Way to cross (Macmillan 1972) John Maxtone-Graham, speaking of the Depression years, gives the following description:  ‘Racing wooden horses about an oval track to the roll of the dice had long been an afternoon diversion on the promenade deck.   Now the canvas track was remade in felt and moved indoors as the after-dinner entertainment, the bettors black-tied rather than plus-foured.   The task of moving the horses on British vessels was always assigned to a blue-jacketed seaman, almost the only time that honest apparel ever appeared in the lounge.   Pursers in uniform called the numbers . . .’   (chp. 8 p.213)

Paine worked on other commissions from the RMSP.   In 1929 he designed the front cover for the Royal Mail Line Cruise round Africa folder (below) containing a description of the cruise, photographs of the places visited, and a map.   Commercial Art refers to the ‘delightful colour scheme’ of the cover which shows a stylised map of Africa and Madagascar, decorated with an ancient Egyptian figure, a Bedouin on a camel, a kneeling African, an ostrich and an elephant.

Printed by The Baynard Press

‘The Round Africa Royal Mail Cruise folder … is an example of one idea of an arrangement carried right through a job.   The first opening carries out the delightful colour scheme of the cover, and the centre opening is as satisfactory as the rest of the publication because it is uniform and very practical.   The description of the cruise, photographs of the places visited, and the map are all at view at one time.’   (Commercial Art)

2 Responses to RMSP They’re off